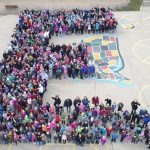 The Eisenhower PTO arranged for Robert Felderman, from General Bob Photography, to create a unique drone video that would commemorate the occasion. It included all students and staff at Eisenhower as well as an aerial look at the building. Thanks PTO!
Watch the video

The program on Friday, November 16, featured guest speakers, viewing of a time capsule put together many years ago, and a performance by the Eisenhower choir. Following the program, tours of the building were offered.

“Eisenhower Elementary School has a long history in Dubuque and has served generations of students,” said Principal Andy Ferguson. “Our celebration will remember the early days of our school while also highlighting the outstanding legacy that we proudly carry on today.”

Eisenhower, named for former president Dwight D. Eisenhower, was constructed in 1968 as an elementary school serving students in kindergarten through sixth grade. Helen Keller, a special education center, was opened adjacent to Eisenhower in 1983 and the two schools later merged in 1990. The school currently serves approximately 540 students in preschool through fifth grade.

←  Back to news listing
Categories
Archives by Month