Registration for the 2017-2018 school year is now open! Visit the registration webpage for full details!

4th Grade students have been visiting National Parks, the California coast and many different ecosystems this spring!  They have transported themselves there with the magic of green-screen videos.  Use the links below to check out their adventures!

Kindergarten students had many special guests at school last week for their Mother’s Day Tea!  Each student contributed to a classroom video to tell their mom why they are special. The kids loved making the videos and couldn’t wait to share them with their moms!
Please take a look at our videos below.

Eisenhower has a new Maker Space in the library!

Magnetic Marble Run is a very popular activity these days in the Eisenhower library! When students have finished their work, you might see them:

Kids love coming to the Maker Space, an area where STEAM (Science, Technology, Engineering, Art, Mathmatics) activities are set up and changed daily in the library. They spend a few minutes experimenting and igniting their creativity and curiosity before heading back to class.

We’d like to thank our very supportive Eisenhower PTO for providing start-up funding for this initiative that we intend to continue expanding and improving in the coming years!  We hope to build our crafting supplies next year, as well as add some additional digital creation opportunities.

Please watch our short video thanking the PTO for their support 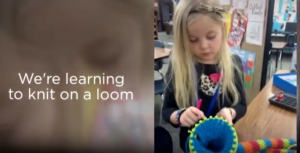 Amazing Readers Battle it Out!

2017 Eisenhower Battle of the Books

Fifth grade students have been reading and studying the Iowa Children’s Choice Award nominee books since January. Six teams of five students competed in the Eisenhower Battle of the Books on Friday, April 28 in Eisenhower’s small gym to show what they had learned. The kids worked together with their teammates to make sure that all of the books had been read by someone on their team. During the Battle, they could work together as a team to answer each question. The Battle was very close with the final three teams tied up until the very end!

Congratulations to our wonderful readers!  They ALL did a remarkable job!

A big THANK YOU to Mark Schmitt and Happy Joe’s on University for sponsoring trophies for our winning team and donating a luncheon pizza certificate to ALL participants! Our winning team, shown below, will be representing Eisenhower at the District Battle of the Books at Bryant Elementary School on Friday, May 12 at 1:30.  We wish them good luck!

Watch a video about the Eisenhower Battle 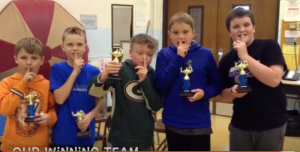 Amazing Readers Battle it Out!

4th and 5th grade students, along with the Eisenhower choir, performed their spring music program at Hempstead High School. They persevered through some technical difficulties and put on a great show! Congratulations to all!